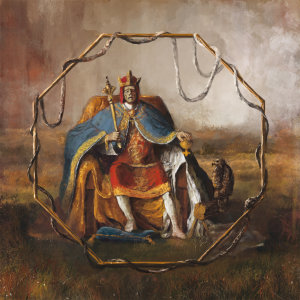 “Hermeticus” is composed of a powerful and evoking sound coming from oldschool european roots. The concept merges history, nature and literature in a symbolic portrait tributing the esoteric myth of the Emperor Frederick II, the medieval Suevian sovereign better known as “Stupor Mundi”, who ruled for a long time in Italy and mysteriously marked Apulian culture. The work is a personal metaphor bearing the ancient hermetic heritage of the band’s homeland, connected with traditional atavistic heathendom. The story is narrated through eight songs composing two main historical and spiritual chapters and is also performed with several Latin and medieval Italian Poetry inserts.

“Hermeticus” is featuring vocals from “V’gandr” from Helheim-Taake (Dark Essence Records) on track4 “Apud Portam Ferram” and “Davide Straccione” from “Shores of Null” (Candlelight/Spinefarm Records) on track1 “The Abomination Throne”. The album has been mastered at Conclave & Earshot Studios (Bergen, Norway) by Herbrand Larsen (ex- Enslaved), recorded and mixed at Molotov Recording studio (Bari, Italy) by Andrea Lenoci. The artwork has been painted by the Serbian illustrator “Khaos Diktator” (Horna, Nordjevel) based on the band’s concept.