Begun in 2008, Lebensnacht was originally intended as a ‘catch all‘ for R. Brockmann‘s musical output. By 2011 however, it became an active proposition and finally developed into a Black Metal project. Brockmann‘s intention and inspiration with Lebensnacht is to explore a relationship with Mother Nature and come to terms with its selfish children – us. 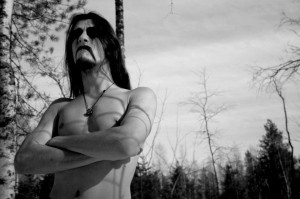 In 2012, Lebensnacht and Naturmacht Productions label mate Agael released the very well received split ‘Apathologie‘. Recorded the same year, the debut album ‘Luonnon Voima‘ was released as free download and the successor “Syksyn Kuoleminen” some months later on CD by NP in 2013. 2014 will follow now the third effort called “uudelleensyntynyt ikuiseen pimeyteen” which is finnish and means “resurrected in endless darknes”.

Another big change in 2014 was the addition of a second musician called “Krell”, who became the drummer of the now two-man-project.

Robert – everything except drums